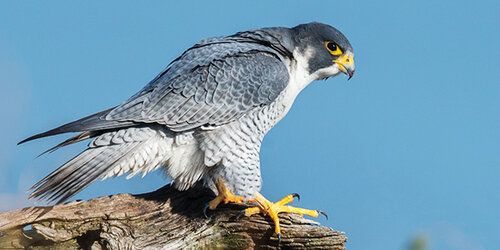 On weekends, The City of London is ripe for socially distanced strolling. On a typical workday, the population swells to half a million people before the tide goes out and the commuters flow back down ‘The Drain’ to return home, leaving a residue of 9,500 residences. The luxury of space called to me, so I escaped the confines of my flat to admire some of London’s more eclectic architecture like the Bloomberg building and the church that served as Christopher Wren’s preamble to St. Paul’s Cathedral[1].

I was not alone.

The predator soared and then swivelled at the behest of her master’s signal. In a flap, the falcon had landed and sunk its talons into the leather gauntlet. Spotted, the fledgling falconer fled.

He had all the gear: boots, camouflage trousers, a gauntlet and the hood used to soothe a raptor. However, the blush of embarrassment in his cheeks, his quickening pace, and the bird droppings in his hair told a different story. He feared being judged by a stranger, and forced into playing a status game.

People tend to either play wealth games or status games.

Someone playing a status game wins when others lose, and they often involve titles, uniforms, etiquette based on myths rather than merit, and us-versus-them rhetoric. After all, inherent to being at the top of a pyramid is having people beneath you. Failing to do this means you’re just sitting on the floor alone.

Someone playing a wealth game doesn’t care about pyramids. They care about creating value – that is, wealth. They make things that help others for the sake of financial, ethical, social, or scientific gains. People playing wealth games break from the status quo, because they’ve found a better way, a new normal that, if the world moved towards it, everyone would be better off. Those playing status games attack those playing wealth games, because a new normal threatens their status. The most common attack is dismissing wealth players as weirdos.

The Black Death nearly put at end to the status games of the British aristocracy in the 14th century. After many bereavements, peasants inherited a lot of land, and could demand higher wages because there were fewer workers, allowing them to afford various luxuries. They were moving up the class ladder, and some thought they were getting too big for their boots.

Parliament acted swiftly. They banned peasants from eating guinea foul or wearing the colour purple – instead, they said, ‘You must wear brown, purple is our colour’. The status games returned, and this time they were legally enshrined to no one’s benefit but those with egos that enjoyed being massaged by triangles.

In 2010, a plague of posters had taken over my school. Some said, ‘Vote Conversative’, while others read ‘Labour. For the people’. With some bias, I preferred the ones that encouraged readers to ‘Express yourself’. For what appeared to be a love of symmetry, our headteacher decided our school would host a mock election to coincide with the UK general election. Students would rally together, form parties, and – for the winner – wield power by ruling (for 24 hours) as headteacher [2].

Curious, and weary of the baggage coupled with the classic political parties, some friends and I formed The Purple Party. Our platform was to break stigmas and foster belonging, hence the slogan, ‘Express yourself’. With a mix of assembly performances, badges, and megaphone campaigning during break time, we were off to an early lead.

That was when the character assassinations attempts began: ‘Jamie is cancelling joy’, ‘He’ll take your vote, and take your money’, and my favourite, ‘Jamie hates babies’. A status game was afoot.

Fearful, the mock Conservative Party started spreading lies to poison the pupils against us, and, as the Purple Party’s leader, their claws came for me. For the record, my positions on these points of baseless vitriol are as follows: I hold a positive opinion on babies, I’m not in the game of stealing anyone’s pocket money, and I’m mostly pro-joy though melancholy has a certain charm.

We rallied against the slander, channelled future Michelle Obama’s, ‘When they go low, we go high’, and came out on top after a last minute endorsement from the Labour Party leader to whom I’m still grateful. (Thank you, Alfie.)

The win was sweet. There was ice cream, fancy dress, and we were able to realise many of the promises we’d made to promote belonging. The sweetest thing, however, was realising that not everyone wants to play wealth games. Some just want status, and care little for improving things. Avoiding people playing these win-lose games has been a lesson I’m glad I learned young. It’s spared me the wasted time playing them myself, and nudged me to seek the electrifying company of the weirdos moving the world forward.

So watch out for status game assassins, find your fellow wealth game players, and run into your weirdness together.

The world will thank you for it.

P.S. Chickens also have much to teach us here, as relayed in this TED talk, ‘Forget the pecking order’. I suggest watching the first 60 seconds and see if you’re not left wondering, ‘Which kind of chicken am I?’.

We also gave out a Christmas present via Issue #4 of Redraft, the other Jamoe newsletter. In case you missed it, here is a direct link to the email, and here is an excerpt:

One of the Greatest Books of 2020: 'The Almanack of Naval' is a book that every human on earth should read if they care about wealth or happiness, and it's free.

"The book is a mixture of mind expanding realizations, harsh truths, meditations, helpful mantras and welcome punches to the face as needed. Could not recommend this more highly for anyone aspiring to have more wealth, wisdom, time, happiness, or peace." – Louis on Amazon

You can view it here and there is an option to download the PDF for more convenient reading.

[2] Last year, the UK’s Channel 4 released a documentary, ‘The School That Tried to End Racism’. After six seconds, I realised that school featured was my old secondary school(!). It’s changed a lot since I was there – we never had to wear blazers and they’ve added a few more buildings. But the trip down memory lane was welcome, and the series is a great guide for how to break free from arbitrary status games that have become normalised.