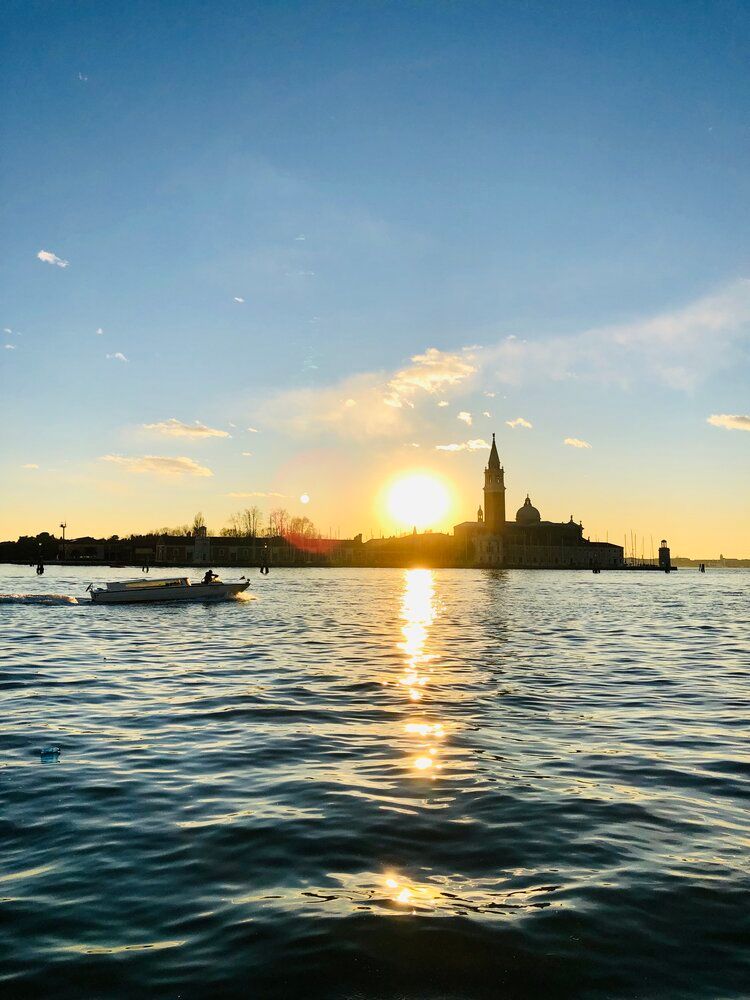 The request was in Italian, so we let our inquisitive smiles hang while our friend listened and translated the lady’s words into English. She was asking if we could repeat our performance from the top, so she could film it.

The triad was born in 2016 in the seaside town of Weymouth. Two friends and I had decided we would spend New Year’s Eve together, and while arranging the logistics for 2017’s festivities, we were awarded the tongue-in-cheek ‘triad’ nickname by the friends we’d asked to join us this time around. When 2018 rolled around, we decided to take things global.

One of my friends, and fellow member of the triad, grew up in Venice, the audacious capital city of Italy’s Veneto region where school commutes and supermarket trips involve cruising between islands on water buses. With his parents' blessing and some tactical EasyJet ticket purchasing, we landed at the airport, boarded a boat, and cruised across the lagoon in the quiet company of the liquid sunrise and the morning fog.

I was not the killer, but the person reaching for my hand was. To add some extra spice to the trip, we’d chosen a 1920s murder mystery theme, which meant cocktail dresses, gangsters, and a healthy amount of double bluffing. Having solved the mystery, we burst out onto the streets of Venice and made our way to the crowds gathering near St Mark’s Square in anticipation for the fireworks and the chime of midnight.

Despite knowing that the washed up actress from Munich had murdered Alessandra’s husband in retribution for not receiving a call back, I took her hand and the MI6 agent's to my right, and our group marked the breaking of a New Year with a chorus of Auld Lang Syne.

It was at the song’s crescendo that the lady approached us with her request to film our sing-song. My friends and I exchanged glances, but linked our hands up again and tried to muster the same mirth and earnest we’d poured into our earlier rendition. Caught up in the moment, it wasn’t until we’d finished that we wondered why she had wanted to film us.

Was it simply because we were singing an old Scottish poem in fabulous 1920s Art Deco dress in Venice at the turn of the New Year? Of course, that’s never the answer, and certainty is better than letting the question itch at us for the rest of our lives, so we asked our friend to ask her.

Jumping between Italian and English meant that her reply was relayed to us like pieces in a jigsaw puzzle:

‘This is the first year he isn’t able to sing it.’

‘It was his favourite song.’

‘I’ll be visiting his grave next week and I’ll playback your video, so we can listen to it together.’

She beamed a smile at us and nodded a goodbye. I wish I had known. I wish I could have sung more in tune, with more enthusiasm, and without the background cynicism that she might only want the video for her Instagram followers.

Thankfully, the cynic in me was overruled, and the lady, whose ‘heart had smiled’ when she saw us, had gone into the New Year with a new story to share with her husband in honour of his memory.

2020 was a tough year. For me, it contained loss, unemployment, and a time with a dangerously low supply of toilet paper. But it was also a year of proving to myself that I could rise up, adapt, and not go entirely stir crazy in ‘London: The Ghost Town Edition’. It was thanks to socially-distanced strangers, friends and family that I kept my sanity, and didn’t lose hope.

As the woes of the last 12 months hangover into 2021, remember the bonds you share with others, whether they are in this world or not. It may be that events continue to unfold in unfortunate ways, but we still get to choose if we pay attention to what the cynic inside us is saying. Likewise, beware of dwelling on the past and letting its shadow darken the possibilities of what’s before us.

Don’t look back unless you’re going that way. Else, you might not be looking when life gives you a golden opportunity to say yes to something that can make things just a little brighter.

P.S. Bringing in 2021 was a more solitary affair, so unfortunately I wasn’t able to sing Auld Lang Syne this time around.

So to you my dear reader, we can virtually sing together with the help of this YouTube video.