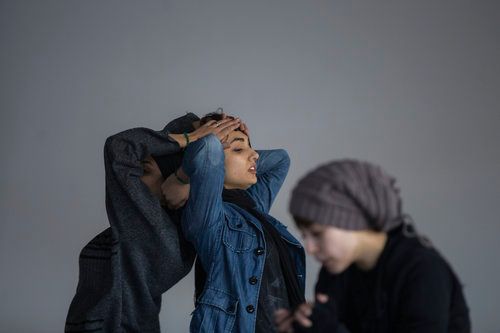 Most people hated this. I was most people.

The performing arts wasn’t what I disliked, but standing exposed in front of everyone – metaphorically, of course. It wasn’t that kind of school. In truth, I loved acting, and grappling with a character, trying to navigate and bare their soul to an audience.

I got bitten by the bug in primary school when I was cast as the auction house owner in a Sherlockian adventure. I had stage time, and I had lines to learn. Quite a lot of lines actually. I still remember rehearsing in my sister’s bedroom; she has these giant floor-to-ceiling mirrors, so I could emote, look at myself, and then refine my performance with the obsessiveness that comes with being a 10-year-old boy.

Being 10, I was one of the big kids in my primary school. At 11, 12, and 13, however, I was but a runt in the secondary school litter of young adults. You’re still knee high to a grass hopper relative to the 16-18 year olds who’ve all been hit by this thing you’ve read, heard, and talked about with gross fascination: puberty.

Then there’s the challenge of finding your place in the pecking order. You meet new people in new classes, and there was a habit, especially in the early years, of some wanting to hammer down any nails that stood up, which made the Goldilocks strategy optimal for surviving: don’t be too hot, or too cold. Just be average.

Then the tipping point came. A Year 9 drama class. The scene had been set: a class-wide improvisation. We were a crowd of English folk in the 16th century deciding what to do with an alleged witch, played by our teacher.

Uncertainty hummed, but then some of my classmates took the initiative. One person adopted the role of mayor, arguing we should have a trial, while another student begged for mercy. She was the mother of the accused, and denied all allegations made against her daughter.

‘Kill the witch. Kill the witch’. I’d started now, so I had to run with it. I’d begun chanting, caught up by the growing current of energy building in the room.

Chanting, like trying to start a Mexican wave, is a risky business. What if no one joins in? You’ll be branded as a fool. The loser who no one pays attention to. Though really, none of that matters if you have conviction.

That’s when something marvellous happened. People started to join in.

The nail that stands firm cannot be hammered down, and in so doing, becomes a hook on which others can latch onto; together you can then start making something beautiful.

In that lesson, I learned that conviction was half the battle. On some level, conscious or otherwise, people respect those that do things with conviction, and in that moment, I’d forgotten about my survival strategy to be average, and instead followed my gut that the character I'd invented would try to incite a mob, and incite a mob I did.

It was dumb, I realised, to wait for permission from your peers to do what feels natural. That’s why school reunions are so dreadful. People have a habit of placing us into the boxes occupied by our former selves. They are, unwittingly, not giving us permission to change. That’s why you must own who you are, and who you want to be.

For me, ‘The fake it until you make it’ advice rings hollow since realising this.

Faking it means you’re pretending to be something you’re not. The sooner you stop pretending, the sooner you'll become what you want to be.

So instead, I offer the amended, ‘Stop pretending to be it. Just be it.’

*No teachers or witches were harmed in the events that shaped this story.