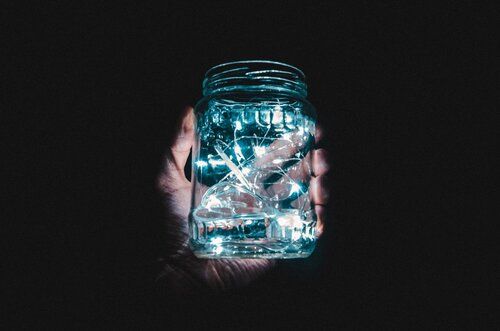 To tell this story, I have to tell you another one first.

It’s about some rocks and a wise professor.

‘Can anyone tell me what this is?’

‘Yes! Exactly. A mason jar.’ The professor dipped his hand inside his breast pocket and pulled out an egg-sized rock. Placing it in the jar, he reached into his pocket again and, one by one, he placed more rocks inside the jar until no more would fit.

The class hummed in agreement.

The professor grinned. He reached under his desk and then started spooning gravel from some unseeable source into the jar. With a whoosh and a ring, the gravel dinged against the glass, finding all the spaces between the rocks.

The class returned the professor’s smile with a warm chuckle. A reply came, this time from a young girl, ‘Yes Sir. Now it’s definitely full.’

The professor slipped off his shoe, and waved it from left to right for the class to inspect. Keeping the shoe in one hand, he raised a finger on his other hand and tapped the shoe. Tilting it ever so, sand began to pour out into the jar of rocks and gravel.

The class laughed. They knew what was coming.

The professor patted out the final few grains, slipped his shoe back on, and raised an eyebrow.

Foreheads furrowed, pencils were chewed, and a fog of whispers grew, as the class thought long and hard before jumping in with their final answer. They nominated the boy sitting in the front as their representative.

‘Yes Sir. After all your tricks the jar is now full.’

The professor nodded and relaxed.

He reached for his coffee mug and poured his morning brew inside the jar.

His eyes twinkled, and a smile broke across his face, ‘Now it’s full’.

He moved from behind his desk to the front of the class, straightening his bow tie before speaking:

‘The jar represents your life. The rocks symbolise the essential things. That which matters the most to you and sits firmly in the centre of your heart.

The gravel’s next. These are all the other parts of your life. They’re important, yes, but in a smaller, secondary sort of way.

Lastly, there are all the little things. Some times sand slips in that’s a little annoying and other times it’s what makes life that little bit sweeter.

When organising your jar, remember one thing: big rocks first. Getting a bigger jar is impossible, so you must add everything in the right order, otherwise, you won’t be able to make everything fit.

No one tells you this when you’re young, but understanding what’s important to you is a skill. It takes practice, and you can expect your priorities to change with time. However, getting them right means you can rest easy knowing you’ve lived a full life, even if you’ve been given a small jar.’

‘Erm, Sir? What about the coffee?’

‘Oh yes – the coffee! Well, we must remember, no matter how full life gets there’s always room to grab coffee with a friend.’

Keeping my jar organised has become a tug of war against the world. The playing field is far from even, as my opponent is employing an army of neon signs, megaphones and psychologists to catch my gaze long enough to slip more of the annoying sand.

So, from my laboratory of one, I’d like to share my three guiding principles for avoiding a messy jar. My love for these principles is that they’re universal and simple, helping me to stay mindful of what’s important for realising the future I’m dreaming of.

Whether it be in my personal life or career, when things have gone wrong, it’s because I’ve forgotten one of these steps.

I’ve come to call this the Honest Productivity Framework, as it shies away from hype, and instead offers a fresh perspective for deciding whether I’m spending my time wisely. Like the egg-sized rocks, gravel and sand, the order’s important:

When I’ve mistakenly given someone an unwanted present, burned through hours trying to solve a problem without considering a smarter approach, or overstretched myself to the point of exhaustion, it’s because I’ve ignored one of these principles.

So, from me to you, I hope they find a place in your life and help you get the most out of the jar you’ve been given.

P.S. Friendship is the most underrated form of love, so, to everyone reading these stories, Happy Valentine’s Day.

Note: The rock, gravel and sand story is a well known parable, and the version featured above is my own rendition of it.