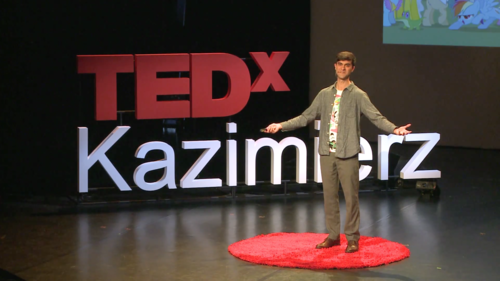 Hello, during my time at Oxford, working at Google and running my YouTube channel, I've had the opportunity to meet a whole host of very interesting people.

And whenever I meet someone who I think is incredibly interesting, I always ask them the exact same question. “What advice would you give to your 19, 20, 21 year old self?”, however old I am at the time.

The ones that stick in my mind:

One from my old boss, she said, “Jamie, you have no idea what it is you want to do yet in your career, cause you haven't done anything yet. You're 19. So go out and do things”.

From my grandma who is 92 years old, she has always said to me from when I was a little boy, “Jamie, remember that you should laugh don't cry because if you laugh, you laugh together. If you cry, you cry alone”.

And one of the other people I had the privilege of meeting was the CEO of the business that I deeply respect. And I asked her this question and her answer really surprised me. You see, when you think of a CEO, you think of someone who is driven by a cold, hard  calculus – always considering her customers, her employees and her shareholders, but she was different.

She said, consume more fiction, because in business, just as in life, when things are going down the drain, everything looks hopeless and you're staring into the abyss, it is your imagination that will save you, not facts. And then she did something that no one else I'd ever asked this question to had done, which was, she asked me, “What advice would I give her?” And so I said, “Watch more cartoons”.

If you were to take a ninja, a pony and a Pokemon, and I handed them to you and you were to put them into a box and you were to shake up the box and then open it and look inside, you would see me. You see, these cartoons have been fundamental in shaping me into the man that I am today through the core principles that they have instilled in me through watching them.

There are sceptics. There are people who say to you when you're grown up that “You're too old to watch cartoons”. That's my dad.

In fact, it was cartoons that compelled me to set up the business that I founded at the age of 12. I saw an opportunity to create a book on how to play this video game that I loved playing. It was popular at the time. And the book went on to sell thousands of copies across the world because of the power of the internet.

Pokemon is a tale of a young boy called Ash on his quest to become the world's greatest Pokemon trainer. A Pokemon master. And on his journey, he refuses to burden anyone, friend or family, with trying to help him in achieving this goal. Instead, he wants to stand on his own two feet and hone his skills to achieve his goal.

There is this coming of age moment that we will go through or eventually go through whereby you realise the sacrifices that your parents have made such that you can live a better life. For me, that realisation happened around the age of 12. I saw the deep love that was driving my mum and my dad to work so incredibly hard, such that my sister and I could have a happy childhood.

So on one side you have Ash, a 10-year-old boy not burdening anyone. And the other side, you have me, a 12-year-old burdening my parents for cinema money at every opportunity. I was being shown up by a 10-year-old. This guy who was two years younger than me. And so I thought to myself, hey, there must be something that I can do here to change this.

I want to become financially independent. I don't want to have to burden my parents with my whims whenever they pop up. So I looked at my strengths and that was when I founded the online business to sell this ebook online and to my own amusement and to my parents, it actually worked, and there was a fantastic moment where we're sitting in a restaurant.

It's me, my dad, my sister, and my mum, and the waitress comes over and she says, “How would you like to pay?”. I scurry, get the cash out of my pocket and put it on the table and I turn to my dad. I say to him, “Don't worry, dad, I've got this”. One of the best things you can do as a 12 year old.

My want was, I want to study at the University of Oxford.

Ninjas. So the most prestigious position that a ninja can hold is to be Hokage. And he or she is the person who looks over the entire village, and looks after everyone, making sure that they’re safe. And that was the dream of Naruto by the cartoon of the same name called Naruto. And the thing is he is unskilled, unruly, outspoken. Sort of hopeless, but he is tenacious and every single person who came in his way and doubted him that he could achieve his dream, he said, no.

I went into my Oxford interview and I changed the, “You can't do that” into the, “I just did” by becoming the first person from my school to study at the university of Oxford.

That’s me as a six year old. So imagine six year old Jamie running around the playground completely carefree. And I noticed that there was this one kid sitting over on their own. And I wonder to myself, “Why is it that they aren't playing with everyone else?”. And then I realised that it's because they're the new kid and they don't have any friends yet.

And I thought to myself from all the influence of all the cartoons teaching you to be this better person, “Hey, what can I do?”. So that day I went home and I went back to school the next day, and I came in with this stack of cards and I gave one to the new kid and I gave one to every single person who was in our year.

And the cards, they were friendship cards. They were cards that meant that if you ever wanted someone to talk to or someone to play with you now had your own little friendship club and everyone was a member. And so the new kid no longer had to sit all on their own on the side and feel like an outsider, because I think we've all felt that moment where we've been on the outside looking in, and if you have the power to change that you should.

I would never have watched this if it wasn't for recommendation of my friend, because I had this foolish prejudice against things that were cute, fluffy and bouncy. But the thing is, once you look past the things that are cute, fluffy and bouncy, you end up discovering something that is so beautifully animated down to the finest detail and is a really intelligent consideration as to what it is to be a great friend.

And when I was watching these cartoons of say, Rainbow Dash, going to the gala or Pinkie Pie jumping up and down, I realised that I was being a bad friend at the time. Me and my friend had fallen out for some really stupid reason, and we weren't proactively taking the opportunities to make amends.

And I thought back to six year old, Jamie, and how disappointed he would've been that the spirit of his friendship club wasn't being upheld anymore, that you just let it go to waste. And so I asked myself, “What would the ponies do?”. And with that, you won't be surprised, me and my friend, we quickly managed to resolve things by actually talking and coming to some sort of peace and being friends again,

Cartoons are our piece on our cultural chess board. Those new to the game of chess, they tend to favour the, at first glance, really powerful pieces. So your Rooks, your Queens. Maturing as a player, you begin to see that all of the pieces are relevant. All of them are important because each of them has its own unique strength that it lends to the game to allow you to win.

And so I want to challenge you all, think of the child in your life. It might be your son. It might be a sister. It might be a second cousin. The next time that they're lost in one of their cartoons, what I'd like you to do is sit with them and try look past the candy floss houses, the war-torn landscapes, the expansive pride lands, or the depth of space.

And see if you can see the values. See if you can see the guiding principles that you can use as fuel to achieve your ambitions or to help you through troubled times. For me, the cartoons have helped me become a better person and achieve the things that I've wanted to do. And isn't that something that we all have an interest in, just at the end of every single day, trying to think back and saying, “Hey, I am just that little bit better than I was yesterday”.